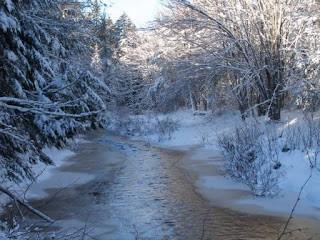 Stuck indoors because of the Thunder Snow storm that slickered up every square inch of the Northwest and was coming back for an encore. Called that because some reporter heard thunder during the snow storm. Got food, got heat, got all the comforts. But I want out. Gotta send Christmas packages. Call with Tom: he said use a walking stick to take you over the icy sidewalks. Good idea! How about my long handled scrub brush sans brush--I used to clean the outside of our old house with it in the Spring--screwed a screw into the tip of the pole--wa-lah! I'll get the pro version from REI Tom mentioned later. Off to Staples/UPS in a 3 legged trot to send the Christmas gifts that weren't going to make it before Xmas because of the storm.

Surfaces along the street for walking: 1) dirty ice resembling what leftover lumpy oatmeal would look like frozen. 2) Mini snowy mountain tops you had to balance on or walk between covered with a thin layer of ice. 3)Broken up ice that looked like what a shattered windshield looks like. 4) Then there was that lumpy souffle, rigid with defeat that I made in '66--that stuff is what the thrown up snow at the curb edges looked like. 5) Predatory ice covered with a thin layer of lacey snow--a trap.

I had new warm boots with furry tops to keep me connecting to the earth. Sticking the washing I mean walking stick in the snow at the edge of the sidewalk helped transport me over the sheer ice. I paused at every driveway to wait for cars that might turn and not be able to stop. People did seem anxious to stop for a 3 legged woman, that is, with a walking 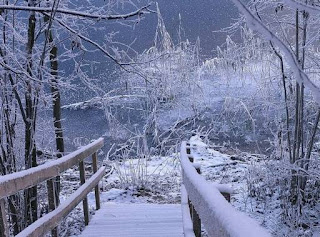 stick walking in a hesitating fashion wearing little round sunglasses. The two miles went by quickly. Package delivered to the heroes at UPS, I took the long way home, carrying a new surge protector for my new laptop to meet the next wind storm coming after dark. I abandoned the snow cement on the street for the sweet powder on the creek trail. The ducks clustered in the middle of the iced over lake I passed, their bodies warming just enough water for the clan. What keeps them warm?!

The sun did not have much of a point of view from behind that gauzy overcast lid. Hard to imagine it's radiant beams from Heaven above. Easy to imagine the insides of a freezer full of beef and corn, some frozen oatmeal, cookies. Hmm. The brisk air at 20 degrees put a spring in my walking stick and I got hungry. Thought I'd turn on the holiday music on my IPod when I got home and make some old fashioned Christmas cookies to eat when the power went out. Food and snow and little adventures, that's what I'm thinking about. And, back at home, the joy of a challenge met, with the help of my bro. Merry Christmas.
Posted by BBWriter43 at 2:40 PM