Ski Trip Via The Frontier

I followed the young man who was buying my truck up the hills east of , climbing ever higher. I saw the snow topped Cascade and lying like immense parentheses

around his neighborhood. I was mesmerized by the view. Under that immense blue sky, he pulled into his driveway, collected some things from his old car and brought them over to the truck. I had his bank check in my pocket and happy thoughts of closing the deal. During a few days of negotiations with him, we came to know and trust each other. Tales of disaster in these transactions nipped at my consciousness. But he was the one to first suggest meeting in a public place for my safety. Pretty quickly I could tell he was “ok”, a person more rural than urban. He ferried me to repair shop, bank, his home and mine, to make the transfer, all with good manners. I admired his ability to think the thing through as he went along. At my condo to get the title, he said,

“You have a great view.”

Later that afternoon, son Scott, who had given me tips on the sale along the way, asked me: “So how do you feel now about the selling experience? Would you do it again with more ease?”

I haven’t ever had a dream of victory that I can recall, but I did on the night I handed the truck keys to that young man---

“It’s a pleasure to hand these to you,” I said.

Though I have never down hill skied, I dreamed I was in the snow smothered mountains. I skied/flew down the paths and glaciers with the expertise of an Olympics star. With narrow misses down curving channels of snow, I was exhilarated by the whole thrilling journey. I came to a swishing stop. I looked over the front of my skis to see a 2000 foot drop. I had known without thinking to end my decent with my ski tips at the edge of the snow cliff. Chuckling with pleasure, I admired the view. 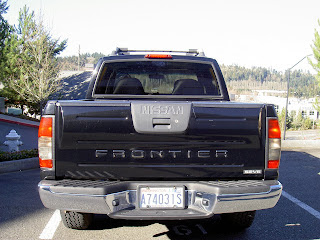 Waking, I remembered rushing to my window to watch my old truck drive off down my hill and onto the road and thought,

“I can see the mountains from my neighborhood; all I have to do is climb to the top of my hill.”