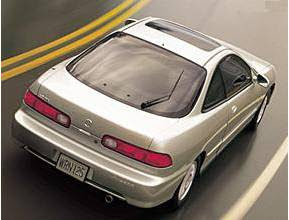 I drive a 2000 Acura Integra that gets 37 miles to the gallon on the highway! Electric sun roof, low to the ground, it's a sportier model than I've ever owned. Acura ad: "Makes any driver feel like a hero." Yes! I am the most heroic 64 year old female computer department admin grandmother in the West!

This car is pretty much a departure from my previous choices. I have the Acura because I have a son who brilliantly thought of me when his Dad's wife was ready to sell hers. I would never have picked out such a sporty model. I was going for a used Subaru Forester or a Toyota Camry. At 64, economy and reliability were at the top of my list. How many more cars does one buy in the last half of life, anyway? I wanted a car to last! I was ready to choose reliability over coolness.

But here I am driving around in this little gem, getting great gas mileage at a time when it's needed not just by me but by the country, enjoying plenty of accessible storage, parking in tiny spots, enjoying the electric sun roof and leather seats.

It took a little getting used to the new body style, for I sold a 2001 Nissan Frontier pickup 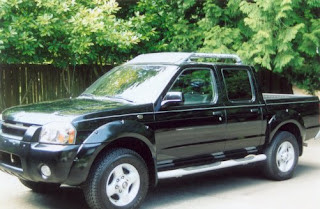 for it. Spying the truck on the car lot, it was an immediate done deal because it was the same model my brother had picked out for himself. It was pre-researched and tested. That's all I needed. I got occasional envious looks from teenage boys that would have revved my jets much higher 30 years ago. Now it just kind of tickled me. There was lots of back seat room for bringing my son and his wife from the airport. I could take naps in the back seat and enjoyed the smoky windows for privacy as I snoozed for 15 minutes. (Naps are big with me.)

My daughter and I used the truck for hauling bark and boards and furniture and garden supplies to our suburban house. I liked sitting up high, looking tough. (ha ha) But here at the condo, I have other needs. Like looking cool driving to the nature trail. Best part is I traded price-wise straight across. No more car payments. At least for now. Yes!

Before I had the Nissan, I really had fun with a 1984 Volkswagen Westphalia. That vehicle came to me on a moonbeam! How I loved the Westphalia! My family has always enjoyed VW buses. I went back and forth over the mountain to visit my sister, camping in her back 40 by a stream. I camped with my daughter and granddaughter and 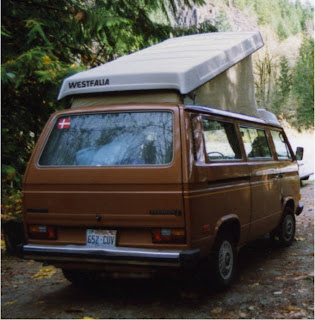 hauled stuff around. I took naps in it too--an auto-immune disorder laid me low for a while. The stove worked, the tent worked, the sink worked, the back heater worked, the upper bunk was cozy and fun to set up.

I bought it from a gravestone carver from Denmark who was staying at the YMCA downtown. Very handsome. Just a little extra effort needed in keeping the engine in top shape. Actually I could have bought a new car for what I spent on the cost plus repairs, but I never could have found anything like my Westfalia!

When ready to sell my wonderful Westfalia, the buyer turned up in the form of my nephew who seemed to love it as much as I had. He's still tooling around in it in the summer; 'ol "Punkin" is enjoying the music of the bands that my nephew plays in around the state, like with Panda Conspiracy at the Summer Meltdown every year in Darrington. Lots of stories still to come for the 'ol camper. She even sat right next to the stage in the summer concert he staged on the other side of the mountain! Title: star dressing room. 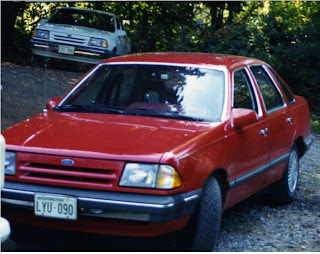 Before the Westfalia was a 1986 Ford Tempo, a twin to my daughter's car. We went off one day to the south end of the city and bought identical Fords, one white, one red, from the Hertz rental outlet. $7500. Seems like a lot. How could we afford that!? Well, we did.

The Fords took us to work and around town for a while. Not the most beautiful cars in the lot, but pretty reliable. It was a lark having matching cars. I kept the Ford for a few months after I bought the Westfalia. I liked having two cars. The internal prestige waned and I sold it. My daughter went next to the auto love of her life, her Mitsubishi Montero.

Before the Ford, I bought a 1979 Honda Civic 3D hatchback 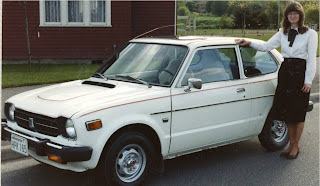 . It was a Lemone. I took it to a mechanic who had a home shop and he took me for what I was--no experience to know what end was what. All I know is I spent a lot of money on the silly thing and still dislike the whole memory.

But for now I'll stick with the thrill of the first real independent auto purchase in my new life. I made the deal on my own and that was really exhilarating! The car had a little style compared to its predecessor and so felt like success. It took me to work and parties and to get haircuts. Ha ha.

The Civic's predecessor was a 1970 Dodge Dart Swinger slant 6. A sweet little car that my friends and family raved over for its quality and dependability. I got it at 35, a particularly self generated hard time for me, when my Mother rescued me by selling me her old car. She had stored it in a friend's barn after my Dad's death, and wanted only $50/month until the $500 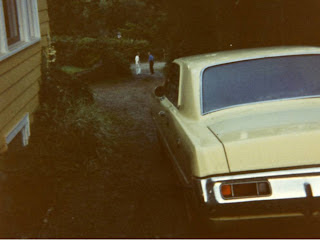 price was paid off. I am still grateful for her generosity 30 years later. Maybe she was relieved to get it off her hands, but still.

I don't think that in 1970 "Swinger" meant anything except someone using park play equipment. Dad was a rowdy guy in his day (the 30's) but more conservative as he got older. Pretty sure that "Swinger" got its bad rep later.

The Dart always felt like a rescue mission to me, a gratuity from the Universe, and I didn't like the idea of selling it but my advisers said I ought to upgrade and get rid of the aging Queen. Which I did. For the Civic! Oops.

After musing over all this car buying and selling, I do feel kind of like a hero. It's such a pain in the patooka to buy and sell cars. They cost so much and so much is at stake, if you don't have extra money to play the game and lose. But here I am where I am and enjoying a few years of Acura happiness, courtesy of my son. One thing I observe: the cars I relied on other people for, turned out the best!

I am settled into the Acura's zippy factor now. My niece, however, apparently was not, for when she rode with me last week, heading down the hill from the condo, she actually squealed and said "This is fun! Boy!" I looked over and she had an ear to ear grin on her face. I loved her reaction, enjoying the feeling again myself. Down on the flats I sensed I was talking to air, looked over and there again was that eyes wide, ear to ear grin. "Fun, huh?" I said. "Do you like roller coasters?" she said. "No!" I said. "Me neither," she said. Yet there was that marvelous grin, just shy of a roller coaster squeal. I grinned with her. 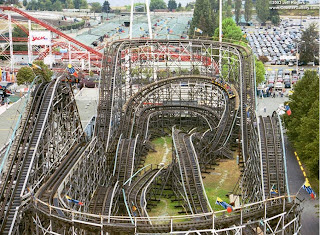 Maybe I like the roller coaster syndrome. Looking back at life's constantly changing and challenging courses, I can say it's a good life, requiring constant heroic responses--a squeal, then action. One goes on and on, buying the next vehicle to get to the future---this time an Acura courtesy of my son, a hero to me.
Posted by BBWriter43 at 7:47 AM No comments: